Coalinga’s sales activity from July through September was 1% below that of the third sales period in 2018. Cash receipts for the same period were 10% less than at this time last year when late payments were being received following delays caused by the state’s tax filing system.

The state requires discretion when addressing sales tax activity to protect taxpayer confidentiality. As a result, nothing that would reveal the activity for a specific taxpayer can be discussed. At times this will mean that the results for an entire group of businesses may not be addressed if a single business dominates that group’s results.

Much of this period’s activity was influenced by a decline in sales by a variety of taxpayers who appear to be operating under contract with one or more entities. Meanwhile, fuel sales volumes were mixed but mostly lower, which is similar to trends found around the state.

Measure J, the City’s 1% local use tax generated $465,349 in its second quarter since inception. Sales of petroleum products, including equipment for wellhead production along with capital investments made by local businesses generated the largest volume of receipts this period.

Net of adjustments, taxable sales for the entire San Joaquin Valley were up 4.4%. 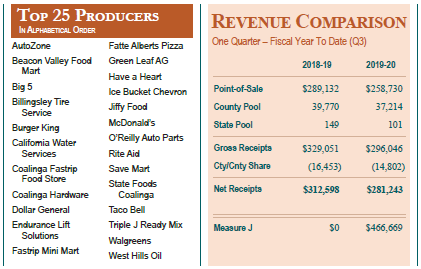 The local one-cent share of statewide sales and use tax from sales occurring July through September was 2.2% higher than the summer quarter of 2018 after adjusting for accounting anomalies.

The bulk of the increase came from the countywide use tax allocation pools and is due to the acceleration in online shopping where a large volume of the orders are shipped from out-of-state.

With the exception of some discount and value-oriented retail, most categories of general consumer goods were down. New cannabis related start-ups offset declines in the food and drug group while a softening in building-construction receipts was consistent with recent declines in the volume and value of new building permit issuances.

Overall growth in restaurant receipts continued to soften with a shift toward lower cost dining establishments and takeout meal options. Reports of labor shortages and the impact of homelessness on customer traffic in metropolitan areas were reportedly factors in the decline in tax revenues from higher price, fine dining establishments.

Despite a slight uptick in used auto and auto lease receipts, the auto related group was significantly down due to a drop in new car and RV sales. Previously propped up by a 23% subprime rated customer base and six- and seven-year financing, loan delinquencies have recently surged back to levels last seen in 2009. 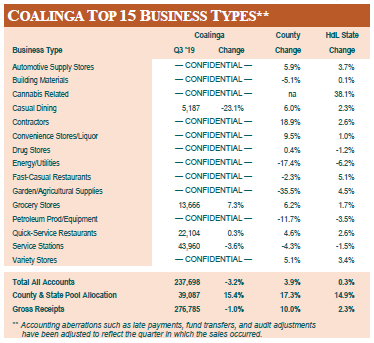 This brings the total number of local transactions and use tax districts (TUT’s) to 325 with 62 that are levied countywide and 263 imposed by individual cities. The number of local districts have close to tripled over the last decade as agencies deal with rising costs and service needs. TUT’s have been a favorable option as visitors contribute to the tax and a collection system is already in place that minimizes administrative and monitoring costs.

California’s basic rule is that the rate for all local TUT’s combined, shall not exceed 2.0% or a total of 9.25% including the state levy. However, the state legislature has authorized higher caps in some jurisdictions with the highest voter-approved, combined state/local rate now at 10.5%.

Thirty-five or more additional local TUT measures are currently being considered for the March 2020 ballot. 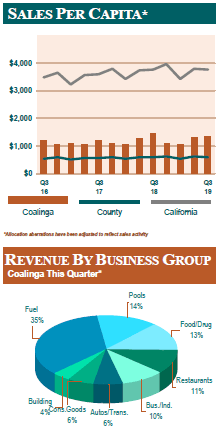